The Pesto Championship “lands ” at the embassy in London!

The Pesto Championship “lands ” at the embassy in London!

It ‘started with the greeting of the Italian ambassador in Great Britain , the Pesto competition which was held in London , on the occasion of the event to promote Ligurian food and fashion enterprises. In the picture, the Ambassador in official dress with his wife, after the event they went to Buckingham Palace! 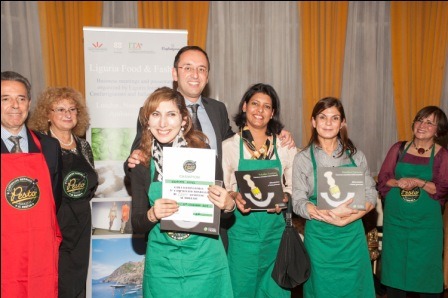 Our congratulations to the 10 contestants, making Pesto with mortar and pestle for the first time in their life! They are all living in London or surroundings and perform various professions : journalists , culinary experts , food writers , performers , photographers.

Shagufta Ahmed, a British photographer who had never prepared pesto before but usually uses mortar and pestle to crush sugar and lime and prepare delicious mojito! In second place, Agostina Murgia, Italian competitor who lives in London where does the interpreter. In third place Manju Rahim , English food writer. In the picture, the Regional Councillor for Tourism, Angelo Berlangieri, rewards the three top ranked.Our congratulations, in particular, to the champion

The competition was preceded by a demonstration of pesto in a mortar held by Gareth Jones, English journalist and expert gastronome, “ambassador ” of the Pesto Championship in London and member of the jury of the World Championship last year.

The event was made possible thanks to Liguria International, Confartigianato Liguria and ICE in London.