It was the site of the Sea Republic and later the residence for Genoese Doges and then it houses municipal buildings – today “Palazzo Ducale” is not only an historical building, beating heart of the old town, but especially it is the center of the cultural and social life of our city, site for art exhibitions, conventions and seminaries, musical events and international festivals.

The building of the Palace goes back to XIII century when Genoa, after the victory of the Meloria against the Pisani (1284) and that of Curzola against the Veneziani (1298), becomes steadily stronger in economic power in all the Mediterranean area. It is called “Palazzo Ducale” from the year 1339, when it becomes the residence of the first Genoese Doge, Simon Boccanegra. 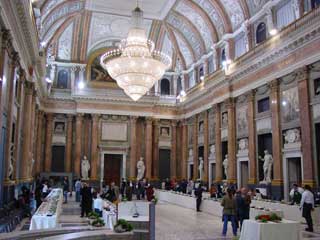 During the XIV-XV centuries the “Palazzo” is progressively enlarged with the addition of new constructions, until it closes the four sides of the square in front of it. The medieval structure disappears with the work carried out in the XVI century, when a new look is given to the “Palazzo”, more suitable for the importance and the ceremonies of the new oligarchic Republic.

In 1777 a terrible fire destroys some parts of the “Palazzo”. The decoration of the “Salone del Maggior Consiglio” (the Hall of the Major Council) is irreparably ruined. The reconstruction of the central part of the building is entrusted to Simone Cantoni, an important neoclassic architect.

During the XIX century, it becomes a municipal building and then it houses the justice court. In the 1980’s a large restoration (the biggest restoration work carried out in the whole of Europe) makes the Palazzo a big and modern center for art and culture, a beautiful symbol of the glory of the past but especially the sign of the future of our city.