The preliminary competition with students taking part in the Erasmus Project in Genoa took place with great participation at the Palazzo della Borsa in Genoa. Kevin Serrano, a Mexican student, has defeated the competition of colleagues from Brazil, Colombia, Spain, France, Morocco, Poland, Portugal and Germany, handling pestle and mortar like a professional and gaining access to the final of the Pesto World Championship, scheduled for 2020. Kevin, Erasmus student at the Master of Robotics of the University of Genoa, beat the nine opponents chosen to represent the seven hundred Erasmus students arrived in Genoa from thirty nations, preparing the Genoese pesto following the strictly traditional recipe and using ingredients of the territory: its pesto has conquered the jury composed by Gianni Arimondo and Mauro Cavallero of the cultural Association of the Palatifini, by the Councilor for Tourism of the Municipality of Genoa Paola Bordilli and by Elena Manara of the Chamber of Commerce. The event involved the Municipality of Genoa, the Genoa Chamber of Commerce, and the University of Genoa. 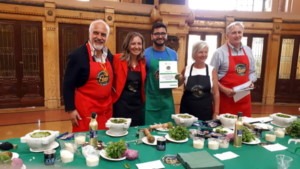 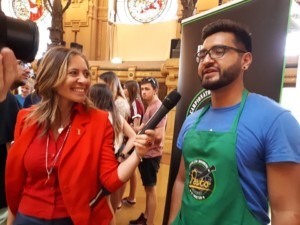