The day – organized by the Italian Chambers of Commerce and the Italian tourism system – began with the award of forty restaurants in New York that have been awarded the brand ” Italian Hospitality “; then it was followed by a Pesto competition involving chefs , operators and media , and after the lunch break (obviously based on pesto !) , it saw the organization of meetings between American tour operators and Ligurian incoming tour operators, up to the buffet with specialties offered by the best Italian restaurants in New York. 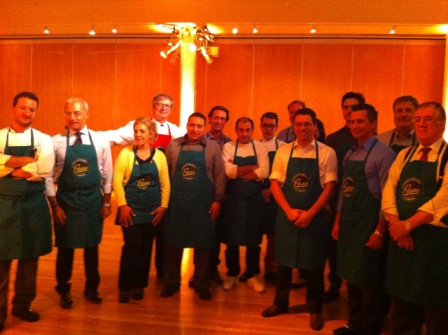 Among the 14 enthusiastic participants in the preliminary competition , the Pesto World Championship has crowned two champions : Claudio Bozzo , president of the Italian Chamber of Commerce in New York that in addition to preparing a great pesto (his origins are Genoese ! ) contributed to the perfect success of the event , and Alfio Longo , classified as second , executive chef of Circo , one of the most renowned restaurants in the Big Apple. He will represent the city of New York to the Genoa Pesto World Championships in March 2014.

During the event , Liguria was able to showcase its own cultural and tourist attractions , its beauty and its food and wine specialties , with “Pesto” to play the role of ambassador!

Thanks to those who made the event possible , in particular Unioncamere Liguria and the Italian chambers , ENIT the National Agency of Tourism and ISNART National Institute for Tourism Research .

Here all the pictures!