Liguria and its World Pesto Championship stars in Niamey, Niger, on the International Day of Italian Cuisine 2022

On 18 November, on the occasion of the International Day of Italian Cuisine in the World, in a school in Niamey, Niger, with boys and girls who dream of becoming international chefs, the World Championship, called by the Italian Ambassadress Emilia Gatto, organised the 4th elimination match of the 10th World Championship of Pesto Genovese al Mortaio (in Genoa, March 2024). The winner was model student Leila Abdou, 20, in the sixth month of her course, to the pride of headmistress Stephanie Cahn and the satisfaction of the country’s Minister of Youth. The occasion of the competition at the ‘Centre de Formation en Hotellerie Acces’ generated other important events: a conference on Italian culture at the University of Niamey and other social initiatives at the Embassy and in the area. All local, diplomatic and international cooperation authorities were present at the event, which proved to be, as was Italy’s intention, highly prestigious, an affirmation of our excellence and not least of the style in which it is communicated and shared throughout the world. The 2018 World Champion, Emiliano Pescarolo, and Genoese chef and restaurant entrepreneur Paolo Ferralasco were present in Niamey.

“Competitions we have done, but never like this one. The young contestants were a spectacle, it was the first time they made pesto with a mortar, but they finished in 15 minutes without even dirtying the tablecloths and they gave us a hard time in choosing the best pesto because they were all really excellent. At the final competition in Genoa they would have seriously contended for the win with more experienced people. I keep two things from this experience with me: on the one hand, the mystical silence with which they watched the pesto mortar lesson that preceded each elimination round, and on the other, the cheerful participation and the quantity of selfies taken at the end of the competition, as if we were Ronaldo and Messi! (Emiliano Pescarolo)

“The guys knew nothing about our sauce but in just 15 minutes they produced a Genoese pesto of the highest quality. One of the judges, the manager of the super-luxury Radisson hotel in Niamey, offered the top three an internship at the end of school with excellent employment opportunities, which we were delighted about. When Leila Abdou heard she had won, she cried with emotion, as if a window had opened in her life that she dared not even dream of. She was so good that I invited her to be my assistant at an important Embassy lunch the next day. I prepared potato gnocchi with chestnut served with pesto sauce, she made the pesto’ (Paolo Ferralasco).

“In the past, the Pesto World Championship had already been involved in other International Days of our cuisine organised by the Italian Government, notably in Paris and Lille. The Italian Ambassadress, Her Excellency Emilia Gatto, wanted us in Niger after the positive experiences in France. What happened in Niamey was another positive adventure, a day of representing Italian excellence and also a transmission of values: the ancient universality of Ligurian food culture together with the modern fascination of Pesto, which touches young people and all those who feel like citizens of the world. I am certain that further international development will be Pesto Championship’s mission in the coming years’. (Roberto Panizza) 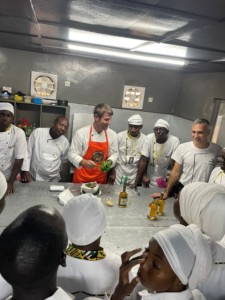